“मोहब्बत के सौगात” is a Bhojpuri Feature Film in color based on the noble theme of “Women Empowerment” . There is an urgent need to create awareness and spread the importance of empowering women in the states of Bihar, Jharkhand, Western UP etc. Cinema is one of the strongest medium of mass effect for spreading such messages. Hence, we took up this noble cause and armed ourselves to produce some meaningful movie in local language of these areas. Movie will bring home the theme in a natural way as the treatment of movie is a mix of commercial entertainment cocooning the theme. “मोहब्बत के सौगात”
Is adorned by 5 lovely songs which are set to mesmerize audience. Film Releasing All India in Nov’2017. 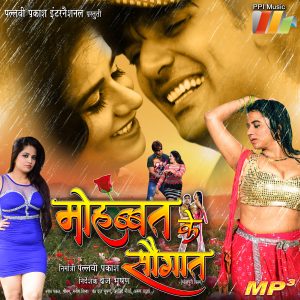